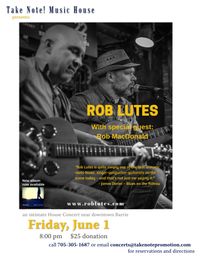 Yes, I’m breaking my own rules about no concerts after the May long weekend, but you know it’s for a great reason! The Take Note! Music House presents Kerrville New Folk winner and Maple Blues and CFMA nominee Rob Lutes with Rob MacDonald on Friday, June 1 at 8:00 pm (doors open at 8:00). Requested donation is $25, with all proceeds going directly to the artist. You may reserve your seat by calling (705) 305-1687 or emailing concerts@takenotepromotion.com (address given upon reservation – downtown Barrie, near the courthouse).

“If anybody embodied the beauty and honesty of roots music, it’s Rob Lutes.” [Maverick]

Since the release of his first album “Gravity” in 2000, Rob Lutes has steadily built a collection of exquisite songs that inhabit the intersection of blues, folk, Americana, and the contemporary singer-songwriter genre. As skilled delivering a Piedmont blues classic as he is performing his own acclaimed original songs, Lutes's masterful fingerstyle guitar work and soulful voice bring an unmistakable intensity to his live performances.  A double Maple Blues Award nominee as Acoustic Act and Songwriter of the Year in 2017, on his seventh album, “Walk in the Dark”, he does what he has done for years: kicks up a little dust, wades into some deep waters and tackles the realities of the world with depth, humour and a unique musical style.

“A gem. Among the best in a crowded roots field.” [Toronto Star]

Situated at the intersection of the blues, folk, Americana and contemporary singer-songwriter genres, “Walk in the Dark” is an exquisite collection of songs that highlight Lutes’s unmistakable voice and literary writing style. Co-produced with celebrated Montreal producer and Cirque de Soleil collaborator Rob Heaney, the album features a group of Canada's finest roots and blues players, including guitarist Rob MacDonald and keyboardist Bob Stagg along with noted artists Ian Kelly, Guy Bélanger and Joe Grass. It finds Lutes, also a Kerrville New Folk winner and previous Maple Blues and Canadian Folk Music Awards nominee, exploring a wide range of subjects and paying homage to some heroes: James Cotton (on “There's No Way to Tell You That Tonight”) and guitarist Joseph Spence (on the instrumental “Spence”). Recorded mainly over three days in late January in a small studio in Montreal's Notre Dame de Grace borough, the recording captures the essence of Lutes's soulful voice and rhythmic guitar style, enveloped by a group of players who are no stranger to his groove. Featuring 12 new originals, including two co-writes with award-winning Americana songwriter Dale Boyle, and the forgotten John Prine gem “Rocky Mountain Time”, the album digs deep into the roots of Canadian and American music and delivers another strong statement. "This album, of all of them, was a journey into the unknown, which is why I like the title so much," Lutes says. "With a great co-producer, and a group of phenomenal players and friends, I went in to the studio to find these songs. And I really feel like we did that." Lutes has released six other full-length albums, including 2009’s acclaimed “Truth & Fiction” and 2013's “The Bravest Birds” which spent seven months in the Roots Music Report top 10 and hit #1 on the EuroAmericana Chart. He performs solo, in duo with Quebec guitar legend Rob MacDonald, and in full-band format and as part of the roots supergroup Sussex. In early 2016, as part of Sussex, he released “Parade Day”, a spellbinding love-letter to the jazz and blues of the 20s and 30s featuring some of Canada's finest jazz and roots musicians. The record has been widely acclaimed by fans and critics alike.
Share
View on Google Maps