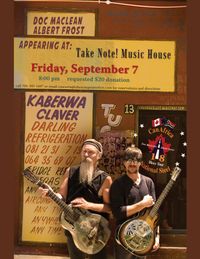 The Take Note! Music House kicks off its 2018-19 season with the National Steel CanAfrica Blues Tour, featuring Doc MacLean and Albert Frost. The concert takes place on Friday, September 7 at 8:00 pm (doors open at 7:30). Requested donation is $20, with all proceeds going directly to the artist. You may reserve your seat by calling (705) 305-1687 or emailing concerts@takenotepromotion.com (address given upon reservation – downtown Barrie, near the courthouse).

Ride shotgun on an epic, blues road tour as Doc MacLean and Albert Frost unite in a four wheel, continental drift. Mixing delta with west Africa, Son House with Ali Farka Toura, electric with acoustic, new stories with old… This Canadian-African collaboration will surprise and delight as it rolls out across nine Canadian provinces.

Doc MacLean and Albert Frost. One guy played with Son House, the other with Ali Farka Toure. So now now, CanAfrica Blues: a playful, yet respectful collaboration by these unique, yet complimentary artists– each of whom mix traditional and contemporary blues and roots music from their own continents. On the ground, it's an old school, vintage road adventure: the National Steel: jamming a big Lincoln across the continent, stopping in places large and small from coast to coast. "No venue too large, too small, too grand or too humble." Songs and stories lived in the moment. Africa and North America in joy and sorrow. CanAfrica Blues. Named as one of the top sets at South Africa's massive, 2017 OppiKoppi festival.

Cape Town based, 2017 SAMA (South African Music Association) Album of the Year winner, Albert Frost has performed with international artists such as Ali Farka Toure, Finley Quaye, Vusi Mahlasela and Ginger Baker. He has toured with Simple Minds, REM, and has supported the Rolling Stones.

As a guitarist, singer, songwriter, and producer, Frost has been a celebrated figure in the South African folk, blues, roots and rock music scene for over 20 years. The Fender endorsed artist romps fearlessly and joyfully between electric and acoustic guitars of every description, as well as surfacing occasionally on keyboards or drums. The remarkable pleasure Frost finds, invents, and simply conjures from the music is not to be missed.

During more than 40 years of touring, Doc MacLean has performed with a who's who of first and second generation blues, roots and gospel artists such as Sam Chatmon, Peg Leg Sam, and Blind John Davis. Among many others, he has supported Sonny Terry and Brownie McGhee, Muddy Waters, Johnny Winter, and BB King.

As a songwriter and storyteller, MacLean has recorded with members of the Canned Heat and Mavis Staples bands. Blues Revue once called him "the Prince of Darkness”. People Magazine (Jan 2018) covered his most recent journey across Africa, describing him as a "beautiful storyteller" and an "inspiration" to Township musicians. This old school troubadour lives on the Blues Highway – self driving to hundreds of shows every year, and sometimes busking the places in between.