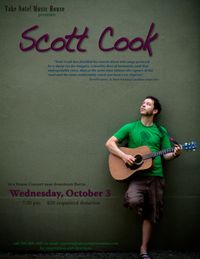 The Take Note! Music House welcomes back prairie balladeer Scott Cook on Wednesday, October 3 at 7:30 pm (doors open at 7:00). Requested donation is $20, with all proceeds going directly to the artist. You may reserve your seat by calling (705) 305-1687 or emailing concerts@takenotepromotion.com (address given upon reservation – downtown Barrie, near the courthouse).

"He sings his heart and soul, and in doing so lets light flood into your own... Truly one of Woody Guthrie's children." [RnR Magazine]

"Scott Cook has distilled his travels down into songs powered by a sharp eye for imagery, a healthy dose of humanity, and that unforgettable voice, that at the same time intones the rigours of the road and the most comfortable couch you have ever slept on." [David Francey, 3x Juno-winning Canadian songwriter]

Scott Cook has been living out of a van or a backpack for the last eleven years, touring almost incessantly across Canada, the US, Europe, Asia, Australia and elsewhere, and distilling his experiences into straight-talking, keenly observant verse.

"As good a modern folkie as we have these days.  A voice perfect for the genre.  An understanding beyond the norm."   [No Depression]

His fourth independent release, "One More Time Around", was nominated for a Canadian Folk Music Award, and its opening track "Pass It Along" won the Folk and Acoustic category in the 2013 UK Songwriting Contest, with UK magazine Maverick Country naming him "one of Canada's most inspiring and imaginative storytellers". He's currently touring in support of his sixth studio album, "Further Down the Line", which earned Cook his second CFMA nomination (English Songwriter of the Year), and comes packaged in a 132-page book containing a look back, in words and pictures, on his last decade of full-time travel.   Cook is one of the hardest-working DIY troubadours on the road today, averaging over 150 shows and a dozen festivals every year since 2007.  All the hard miles notwithstanding, he still believes that songs can change your life, and your life can change the world.
Share
View on Google Maps