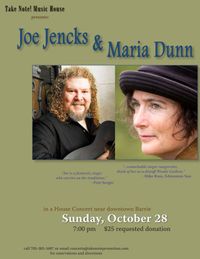 The Take Note! Music House presents two of North America’s strongest preservers of the spirit of folk music, Joe Jencks and Maria Dunn. Their concert takes place on Sunday, October 28 at 7:00 pm (doors open at 6:30). Requested donation is $25, with all proceeds going directly to the artists. You may reserve your seat by emailing concerts@takenotepromotion.com (address given upon reservation – downtown Barrie, near the courthouse).

*** Please note that the Take Note office will be closed and the phone not accepting messages until October 23 – after that, you may also reserve by calling 705-305-1687. (Do not be alarmed if I don’t respond to emails until the 23rd, either – I’ll confirm everyone in order of post date.)

“The key to the future is people joining in. The music of Joe Jencks captures this essential spirit. Joe is a fantastic singer who carries on the traditions." [Pete Seeger]

“[Maria is] an arrestingly powerful singer-songwriter from Canada who writes great historical and social commentary." [Rich Warren, Sing Out! Magazine]

Joe Jencks and Maria Dunn have teamed up for a select number of concerts featuring songs of hope, courage, love and triumph. From Chicago, IL and Edmonton, AB respectively, these performing songwriters represent the finest traditions in music that is socially aware, musically engaged, and filled with heart and purpose. Spanning numerous musical styles and multiple generations, they bring together diverse perspectives into a unified presentation that invites people to sing, laugh, heal, and be inspired to joyfully celebrate their own journey and convictions. Maria and Joe have each won numerous awards for their work, and have been recognized internationally as preeminent in their field. Come join us for an unforgettable evening of stories and songs!

“Climb inside the songs of Joe Jencks, and you meet real people. His lilting melodies and warm, caramel tenor draw us closer to the stories he tells. Jencks finds the humanness that binds us to the people in his songs!” [Scott Alarik, WUMB]

Joe Jencks is an international touring musician, award-winning songwriter, and celebrated vocalist known for his performances of musical beauty, social consciousness and spiritual exploration. A 20-year veteran of the international Folk circuit, Jencks has released 15 CDs in that time. Merging conservatory training with his Irish roots and working-class upbringing, Joe delivers engaged musical narratives filled with heart, soul, groove and grit. Blending well-crafted instrumentals and vivid songwriting, Jencks serves it all up with a lyric baritone voice that has the edgy richness of a good sea-salt caramel. Joe’s most recent solo CD – “The Forgotten: Recovered Treasures From The Pen of Si Kahn” - contains 14 previously unrecorded songs from American Folk legend, Si Kahn. Joe recorded the CD in Canada, with famed producer Ken Whiteley, and the collection of songs represents a return to Joe’s more traditional Folk roots in both theme and musical styles. Celebrating the lost legends of hard working people from New England textile mills to Appalachian coal mining towns, from the Civil Rights movement to forgotten industrial towns in the Midwest. The Forgotten shines a welcome light on the lives of people whose experiences still need to be told and remembered. Jencks’ 2017 release – “Poets, Philosophers, Workers, & Wanderers” debuted as the #1 CD on the International Folk DJ Chart, also garnering recognition for #1 Song and #1 Artist. Additionally, the recording spent eight weeks as the #1 CD on Sirius XM Radio’s Americana Chart. With arrangements that blend sparse acoustic performances with Copeland-like orchestral tapestries, and encompass Celtic, Blues, and Traditional Folk styles, this CD reflects the depth of Joe’s musical knowledge and diversity of influences. In addition, guest artists including: Ysaye Barnwell (Sweet Honey In The Rock), Cathy Fink, Harpeth Rising, Tret Fure, Reggie Harris, Edie Carey, Jon Carroll and many more. This long awaited collection of songs represents Joe’s finest work to date, both as a vocalist and as a songwriter. Having penned several #1 Folksongs including the ever-relevant “Lady of The Harbor,” Jencks has become a fan favorite throughout North America. Co-founder and primary vocal arranger for the harmony trio Brother Sun, Joe is also in demand as an arranger with over 30 appearances as a guest vocalist on various studio recordings. From coffeehouses to Carnegie Hall, Jencks has made a mark on the American music scene, singing and telling stories that educate, illuminate, and uplift.

2017 Juno-nominated songwriter Maria Dunn draws deeply on the folk tradition of storytelling through song. Melding North American roots music with her Scottish-Irish heritage, she sings about the resilience and grace of “ordinary” people, past and present.

“…one of our most important and vital singer-songwriters.” [Roddy Campbell, Penguin Eggs]