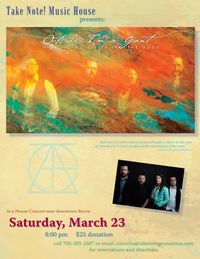 Outside I'm A Giant

The Take Note! Music House is thrilled to present the haunting sounds of ambient folk band Outside I’m a Giant on Saturday, March 23 at 8:00 pm (doors open at 7:30). Requested donation is $25, with all proceeds going directly to the artists. You may reserve your seat by emailing concerts@takenotepromotion.com or calling 705-305-1687 (email best, I have yet to fix the phone!) – address given upon reservation – downtown Barrie, near the courthouse.

Outside I’m A Giant (www.outsideimagiant.com)

Floating down the hills from Quebec's upper Gatineau, the haunting ethereal sounds of Outside I'm a Giant carry poetic homage to Leonard Cohen, along with the unconventional structure and "art first" honesty of Gordon Lightfoot's music. Jérémi Pierre Caron, the songwriter of this touring ambient folk band, drew inspiration from his family's much-loved river hideaway for many of the songs released in their acclaimed 2017 debut album, ”Point Comfort”. Combining acoustic guitar, pedal steel, violin, mandolin, clarinet and harmonica, this four-piece band creates atmospheric, richly layered songs from the heart and hearth that deliver you gently to a calm and peaceful place. Lingering contemplation of nature and human nature is in abundance here. Based in Hull, Quebec, Outside I'm a Giant was founded in early 2016 by Canadian singer-songwriter and guitarist, Jérémi Pierre Caron. Jérémi called upon two talented multi-instrumentalists from previous projects, Samuelle Desjardins, (violin and mandolin), and long-time collaborator Pascal Desgagné (pedal steel, mandolin and harmonica) to form Outside I'm a Giant. Later, in 2017, Gabriel Bouchard brought his easy laughter, clarinet, bass clarinet and harmonies to the group. Captivating performances in local music venues such as The Black Sheep Inn, Irene’s Pub, Ottawa CityFolk Festival (2016), combined with tours of Ontario and eastern Canada are earning them a loyal and growing audience. They performed at the Tay Creek Folk Festival (2017) in New Brunswick, where immediate plans were made to return in 2018. They performed at the Living Roots Festival in Fredericton in May, Tay Creek Folk Festival in July, and toured New Brunswick and Québec in July 2018. Their official showcase at the September Folk Music Ontario conference created a definite buzz. The room was full of curious listeners. “Point Comfort”, their debut album, was released in October 2017 to a sold-out audience at their favourite venue, The Black Sheep Inn in Wakefield, Quebec. Their first album as a four-piece band, “Undoubting Belief In The Good”, was released on February 1, 2019. The album was celebrated at a sold-out show at the National Arts Centre in Ottawa, as part of the NAC Presents series. The sophomore album from this relentlessly creative group offers listeners more of the soothing sounds they have come to love, and some delightful new discoveries.
Share
View on Google Maps