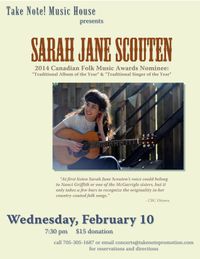 We’re kicking off 2016 with a newcomer to our “stage”, Sarah Jane Scouten. We have a feeling you’ll be demanding her return once you hear her. But don’t just take it from us, here’s what a previous TNMH performer, Sam Allison of Sheesham and Lotus, has to say about her:
“Sarah Jane Scouten is the real new deal. New songs that seem instantly familiar, written in the old time style. Beautiful delivery and phrasing, imaginative narratives, and excellent musicianship. Sarah Jane is not to be missed.”
See? How the heck can you argue with Sheesham Crow? Don’t miss her.

"At first listen Sarah Jane Scouten's voice could belong to Nanci Griffith or one of the McGarrigle sisters, but it only takes a few bars to recognize the originality in her country-coated folk songs." [CBC Ottawa]

“I like her songs, each one has a great line or two that jump out and slap you in the face. She can do funny and she can do sad, there’s just something special in her stanzas that are better than most. Picture a feisty 12 year old Tom boy in a dress gripping a sling shot.” [C.R. Avery]

At age 5, Sarah Jane Scouten was sitting on the dining room table, singing “Lace and Pretty Flowers,” by Canadian folk and country musician, Willie P. Bennett. Hank Williams and Stan Rogers were her greatest inspirations, both a staple at Sunday morning pancake breakfast and afterward, singing bluegrass and gospel music with her father. Her talent for performing came naturally, and as chance would have it, so emerged a knack for songwriting. Bringing us up to date, Sarah Jane Scouten is an international touring songwriter, loved by audiences across the Northern Hemisphere.
Based in Montreal, Sarah Jane became the leader of one of the finest folk acts in the city, as she put together her brilliant string band. With flavours of Lucinda Williams, Iris DeMent, Old Crow Medicine Show and a wealth of old-time and bluegrass music, her songs are faithful to a long-standing folk music tradition, but often spill over into modern themes that are outspoken and edgy, from homelessness to midwifery to tongue-in-cheek heartache songs and unabashed Canadiana.
In 2014 Sarah Jane released her second full-length album “The Cape”, named after her childhood playground Cape Roger Curtis and a stormy seven-and-a-half minute long ballad by the same name. The record throws a wake for all the things we won’t have back again. You’ll find it in the shameless nostalgia for place, time, lost loved ones, frayed family ties and bonds too strong to break.

"The opener, 'Our Small Town' is reminiscent of Iris Dement at her best and sets the tone of the record which is essentially a paen to community, family and relationships. There is a wonderful feel to the CD that at times is mournful and at others full of joie de vivre." [Americana UK]

A traditionalist at heart, she once again shows her signature flair for the roots of roots music, ranging from Western-swing, honky-tonk, Cajun and Appalachian string band music and a hint of the Maritimes. With respect for these roots, she writes from her own perspective, rather than taking on a persona or copying a style, and only writes about what she knows profoundly. As such, the album hits hard and close to home, but also takes off into fiction with songs like “Black Strap Sadie,” “Our Small Town” and “I Had To Be Right.” There are songs about the North, the South, the East and the West and songs like “When I Told You I Loved You” about traveling in between. The album finishes with an original French-language song/fiddle tune called "Change of Heart Waltz," written in a Cajun style.

The Cape "conjures up a vintage Southern atmosphere." [Exclaim!]

The new album was recorded and produced by Juno-nominated producer Andrew Collins (The Foggy Hogtown Boys, The Creaking Tree String Quartet and Annielou) at Sytesound Studio in Toronto and was mastered by David Travers-Smith. With the string band sound at the core of the record, “The Cape” also features Aaron Goldstein on pedal steel (City and Colour, Daniel Romano), Treasa Levasseur on accordion (Corin Raymond and the Sundowners), Sly Juhas on drums and Sarah Jane’s sister and fellow Montreal songwriter, Anna Scouten lending her arresting blood-harmonies.