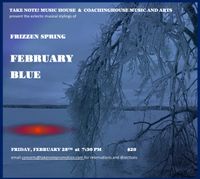 The Take Note! Music House in collaboration with Coachinghouse Music & Arts presents the eclectic musical stylings of Frizzen Spring on Friday, February 28 at 7:30 pm (doors open at 7:00). Requested donation is $20, with all proceeds going directly to the artist. You may reserve your seat by emailing concerts@takenotepromotion.com or calling 705-305-1687.

Led by Marilyn Reesor and Alyssa Wright, Frizzen Spring is a musical fusion collaborative, presenting eclectic and engaging music unbound by constraints of genre. Classical training, jazz sensibilities, a pinch of folk, dash of pop, sprinkles of avant-garde. An ever-changing chamber ensemble of performance artists, improvisors, multi-instrumentalists and singers who bore easily and like shiny things.

FRIZZEN SPRING - outside spring which controls the frizzen position, either keeping the gunpowder safely inside or creating the spark required to shoot everything forward

Will there be a spark…?

ZipBang, where will the spring send them next? This month, it’s to the world of “February Blue” – what could that mean? An evening of The Blues? Heck, no – that would require far too much consistency. Although there will definitely be some bluesy flavours in the mix, there will also be Klezmer showtunes, theatrical tangos, a waltz or two, do-you-even-know-how-many-songs-and-pieces-have-the-word-blue-in-them?!?, and maybe they’ll even play music in other colours because NOBODY PUTS FRIZZEN SPRING IN A CORNER!!!

The comedic, casual banter between these musical friends belies the intensity of their performance as a virtuosic ensemble. Marilyn Reesor is a concert pianist and organist, fiddle player and singer. Alyssa Wright a solo and ensemble cellist and singer-songwriter. They’ve also been known to play the accordion, double bass, grandfather clock, and didjeridu, not to mention furniture and other household items.

From their touching duets of Joni Mitchell’s “River” and the traditional “Carrickfergus”, through transcendent renditions of tangos by Piazzolla and serenades by Rachmaninoff, to theatrical and avant-garde arrangements of well-known classics, their performances are not easily defined, nor is their style easy to pin down – other than music they have fun playing, and pushes them outside the box, or sometimes even the warehouse in which that box is stored.

They are creativity personified, always exploring and experimenting, taking their audience with them through rabbit-holes and worm-holes and landing them gently with smiles on their faces. Promise.