With founding member Michael Adamson retiring from the group in September, 2015, the Amity Trio is no longer performing together as an ensemble, nor accepting new bookings.
Please contact the individual musicians, or contact us via Take Note! Promotion for alternate configurations.

Intent on bringing quality chamber music to the Simcoe region and beyond, the Amity Trio was known for its sure ensemble playing and warm, open interpretations.  In its most recent configuration, the group’s members were Michael Adamson (violin), Alyssa Wright (cello) and Marilyn Reesor (piano).  (Former members included pianists Craig Winters, Sandra Ruttan and Olga Lishansky, as well as cellist Brenda Mueller.)  Each is an accomplished instrumentalist and sought-after soloist in their own right, but their chemistry within the trio - and affinity for the music created - generated performances of delightful musicality, passion and grace. 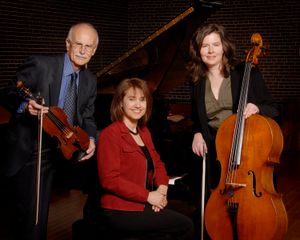 From the early classical works of Haydn and Mozart through such romantic and 20th Century composers as Schubert and Dvorák to contemporary works by Arensky and Piazzolla, the Amity Trio selected some of the favourite music written for the piano trio, and enjoyed seeking out some of the lesser-known gems.  Whether having fun with a salon piece or tackling the angst of Shostakovich, the trio’s performances were always in service of the music.

Since its inception in 2001, the Amity Trio concertized extensively throughout the Simcoe region, Greater Toronto Area and south and central Ontario.  Highlights include performances at Stouffville's Lebovic Centre for the Arts, Barrie's Colours of Music Festival, the Kitchener-Waterloo Chamber Music Society and the New Tecumseth Festival, plus repeat performances for Toronto's Musical Moment Concerts, Creemore's St. Luke's Gift of Music, Barrie's Midday Music with Shigeru and Alliston's Gibson Centre for the Arts.

The trio introduced its final configuration at the 2012 Colours of Music Festival and Creemore Festival of the Arts with "neglected gems" by Saint-Saëns and Catoire.  New in the 2013-14 season was a programme featuring Tchaikovsky's challenging Trio in A minor, Op.50, and the lesser-known Phantasie in C minor by Frank Bridge.  The trio returned to the 2014 Colours of Music and St. Luke's Gift of Music with a programme featuring the music of siblings Felix and Fanny Mendelssohn.  Their farewell concert was for Barrie's Seniors' Serenade in September, 2015, featuring music by Schumann, Dvorák, Huré and Delibes.